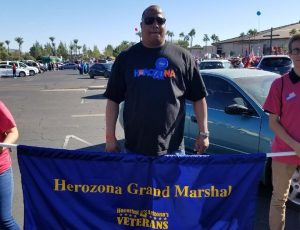 The HeroPreneur National Veteran Business Summit, a three-day event for military veterans, returns to Phoenix for its second year.

HeroPreneur supports veterans by focusing on entrepreneurship, employment and education and will offer panels, workshops and job opportunities to veterans.

HeroPreneur founder and Scottsdale resident Alan “AP” Powell created the event because he understands firsthand how difficult it can be for vets re-entering the workforce.

Powell, a U.S. Army Desert Storm veteran, founded HeroPreneur in 1991 when he got out of the military. He applied to jobs but confronted an unfortunate truth: “There weren’t any opportunities for a veteran to own his own company or start a company,” he said.

He took matters into his own hands, creating a platform for vets called the Checkered Flag Run Foundation, which was later renamed to HeroZona Foundation.

“When I figured out Arizona had 640,000 vets, I sat down with Gov. [Doug] Doucey, Sen. [John] McCain and former Mayor Greg Stanton and Mayor [Jim] Lane from Scottsdale and figured out what would be the best entry point to try to create something and actually came up with HeroZona,” Powell said.

HeroZona Foundation is a nonprofit organization that offers under-served students and veterans entrepreneurship, employment and educational opportunities through various programs and events.

HeroPreneur is spearheaded by HeroZona Foundation and Arizona Department of Veterans’ Services. The inaugural event took place last year, and it was a success.

Participating businesses conducted 600 interviews, and about 80 percent of those interviewees were hired.

It’s through HeroPreneur that Powell hopes to continue to decrease Arizona’s unemployment rate and increase the number of veteran-owned businesses.

Veterans are more likely to be self-employed than non-veterans – the unincorporated self-employment rate for veterans was 7.1 percent in 2015 compared to 6.4 percent for non-veterans.

But the Bureau of Labor Statistics reported in March 2016 that only 4.5 percent of the more than 3.6 million people who have served in the U.S. military since September 11, 2001, have launched a company. This amounts to about 162,000 veteran-owned businesses.

These numbers may seem impressive, but it’s actually alarmingly low.

Last century, 49.7 percent of World War II vets went on to own or operate a business, according to Syracuse University’s Institute for Veterans and Military Families.

Powell believes it’s the lack of resources, education and guidance that discourage veterans from pursuing entrepreneurship.

However, at HeroPreneur, all resources are under one roof – the Phoenix Convention Center.

Veterans can attend HeroPreneur’s workshops and classes to gather tips and advice on how to start their own business. They will also have the opportunity to get funding at the event.

“There are so many programs that are out there for vets, but you have to know the right people to talk to and be able to get the information correctly,” Powell said. “That’s why we have this one-stop shop Super Bowl version of a veteran experience.”

Plus, the programs offered are customized to cater to all veterans.

“You have people from all different walks of life. Everybody has different issues,” Powell said. “You have some people who have post-traumatic stress. They need help. Just because you have PTSD doesn’t mean you can’t be in business or you can’t have a job.”

Award recipients include Donald E. Brandt, president and CEO of Pinnacle West and Arizona Public Service, who will receive the Maverick Award.

Powell hopes to not only support, guide and serve Arizona’s veterans through HeroPreneur, but he also stresses the importance of helping vets feel part of the community year-round.

“I don’t think people really understand the sacrifice that a lot of people made for this country,” Powell said. “If people understood the sacrifice, they may be more willing to help veterans – because this is a big sacrifice.”

All workshops and the business and career fairs are free to student veterans, Reserve Officer Training Corps, active duty military, military veterans and their spouses.